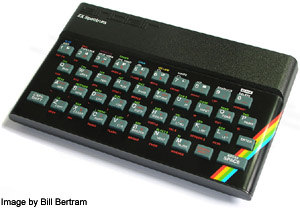 The Sinclair ZX Spectrumnote note to Americans: it's "zed-ex", or "Speccy" to its fans, is a masterpiece of early 1980s computing Minimalism. Everything is as simple and cheap as possible. Because of this, it became famous in Britain and Spain in The '80s, and eastern Europe and Russia in The '90s, as a game-friendly home computer for people who otherwise couldn't afford one.

The Speccy is based on a couple of earlier computers, the ZX80 and ZX81. These were little more than a Z80 processor, an incomplete 4K version of BASIC, 1K of RAM, and a membrane keyboard — the first releases were sold as kits. The Z80 drew the text-only screen (when it wasn't busy), video output was to a TV set, and programs were stored on audio cassettes. The primitiveness was deliberate — the ZX80 was designed to be the cheapest computer on the market, and the ZX81 made the original design even cheaper. The ZX81 was only £70 (or $100) in 1981, and sold over a million units. The Speccy, designed to be the cheapest color computer on the market, improved on the ZX81 with a 16K almost-complete BASIC, 16K or 48K of RAM, a video chip, a beeper, and a rubber keyboard.

The Speccy was released in April 1982 at £125 for the 16K model and £175 for 48K, dropping as time went on. Sinclair was swamped with orders. The low price allowed the Speccy to hold its own against more technologically advanced competitors such as the Commodore 64, BBC Micro and Amstrad CPC. Sales figures went into the millions, mostly of the 48K model, and it brought Britain into the home computer age (and earned its inventor, Clive Sinclair, a knighthoodnote well, except for the little fact that Uncle Clive had nothing to do with the design of any of his company computer products; Speccy hardware was designed by Sinclair Research's Richard Altwasser, and Steve Vickers of the Nine Tiles wrote the system software, including Basic 48).

The Spectrum+, introduced in 1984, was essentially a Product Facelift, replacing the rubber keyboard with a plastic one, modeled after the failed Sinclair QL (an abortive attempt to create a business machine to compete with the IBM PC), and fixing some graphics bugs. The third and final Sinclair Spectrum, developed in collaboration with Spanish distributor Investronica, was the 128, in 1986. This had 128K of RAM, an even better BASIC, MIDI, a monitor port, and three-channel sound.

Amstrad bought Sinclair's computer line in 1986 and continued improving the Speccy with a full-travel keyboard, an internal cassette drive, and finally with a disk drive (similar to the Amstrad CPC 6128) in 1987. But these later models have backward-compatibility problems.

As a video game computer, the ZX Spectrum had some blatant technical deficiencies: games loaded slowly (and quite noisily) from cassette tapes, and monochrome display windows were a frequent result of the graphics hardware's unique limitations on colornote Specifically, an artefact called "attribute clash", in that attempting to add more than two colours in a tile results in rather glaring bleeding effects especially on complex artwork, workarounds to which have been devised by programmers throughout and after the Spectrum's commercial lifetime. Yet the Speccy's importance to the 1980s European video game scene should not be underestimated; practically every British video game company supported the system to a greater or lesser extent. The ease of porting games from ZX Spectrum to the Amstrad CPC and MSX often resulted in the reproduction of the Speccy's technical faults on those computers' more powerful hardware, much to players' annoyance.

The demise of the Speccy in the early 1990s isn't the end of the story. Because it's so simple, it's easy to clone. The first Speccy clone was an authorized version by Timex (yes, the wristwatch company) sold in the United States (for a few months), Portugal and Poland. The most ambitious Speccy-compatible computer was Miles Gordon Technology's SAM Coupé, which featured enhanced graphics and sound hardware that were intended to make it a low-end competitor to the Atari ST and Amiga. Unauthorized Speccy clones started appearing in the Soviet Union in the mid-1980s, followed by several countries in eastern Europe, along with India, Brazil and Argentina. The Soviets used their clone of the chipset as an embedded system for controlling industrial machinery, and it's still in limited production in Russia.

The fansite World of Spectrum

, which is officially endorsed by Amstrad, offers various emulators for the system and most of the original games for free as memory dumps or tape images. note (If you don't want to get flamed by the Spectrum community, never refer to any Spectrum game as a "ROM"...unless you're referring to an Interface 2 cartridge, of which only six or so were released. Arcade and console game images are called "ROMs" because that's literally what they are; as already mentioned, almost no Speccy games were ever released on ROM.) The site has gone all out to ask the original producers of the games for permission to distribute them freely (permission which has been granted in the majority of cases, the exceptions mostly being games published by companies that still exist who fear that they compromise the integrity of their current catalogs by allowing free download of something that ceased to be profitable to them in 1993). Nevertheless, the site has about 90% of the computer's software library up for free legal download.

And now someone's brought out a new model,

with an SD card slot, HDMI output and an optional accelerator board that adds a 1GHz processor and 512MB of RAM. Precisely what problem this is meant to solve is not clear, but it does look extremely cool.

Thousands upon thousands; conservative estimates hover around the 11,000 mark note (and that's only the games which were commercially released; there were also countless thousands of homebrew games, magazine typeins, and many others), while the World Of Spectrum

library contains around 9,000 of them.

Original to the Spectrum