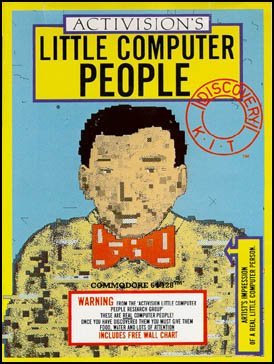 Little Computer People (also known as House-on-a-Disk) is a 1985 video game by Activision.

Little Computer People is considered the first mainstream life simulation game. There isn't much interactive gameplay to the title. Instead, the player watches a little man as he goes through his daily rituals. The player can interact with him, such as giving him commands or giving him presents, and sometimes the character will also engage interactions with the player. Each copy of the game generates its own unique character. The character's name is also randomly selected from a list of 256 different names.

The documentation for the game tells a story about how actual "little people" live inside your computer. The software "brings them out" and lets you become their caretaker.

While not much of a traditional "game". Little Computer People received acclaim for its oddball and interesting theme. It won a Zzap! Gold Medal Award in 1985 and was voted Best Original Game Of The Year at the 1986 Golden Joystick Awards

The game originated on the Commodore 64. It also appeared on various other computers such as the Sinclair ZX Spectrum, Amstrad CPC, Atari ST, Apple II, and Amiga. It was ported in Japan on the Family Computer Disk System version and PC-8801.