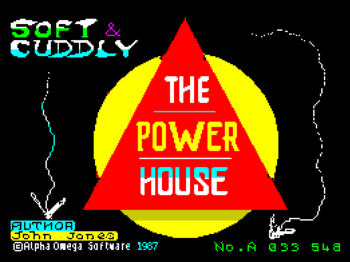 The least scary screen in the game. The one immediately afterwards features a grinning decapitated head, with two more in the background.
Advertisement:

Soft & Cuddly is a video game developed by John Janes and published by The Power House for ZX Spectrum in 1987. It's a platformer remembered mostly by the Nightmare Fuel and Mind Screw with gory and weird imagery. In it, you control a small blue man named Dren who must rebuild his mother, who is the Android Queen, by finding eight pieces of her scattered around 256 screens. The game also came with a song by H.E.X. (who later went on to develop and provide the music and art to the rather infamous Top Banana), which can be listened to here

Compare with an earlier released game Go To Hell by the same developer and Top Banana by the music composer, which despite being far Lighter and Softer, is still surreal and unsettling.