Move in the Frozen Time 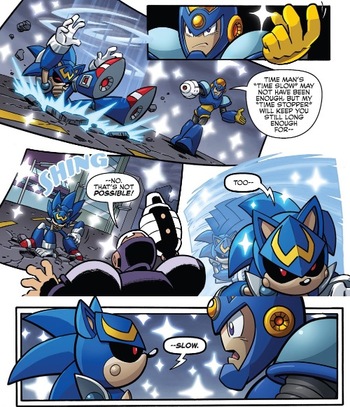 You've just stopped time (or at least heavily slowed it), freezing everything in the world except you and maybe your bullets. But somehow one person is able to ignore this, and continues to move around just like you can.

This comes in two major forms. The person either does get frozen but becomes Un-Paused before they should, or it's a No-Sell on the entire effect. This is not always a simple matter of just being immune though, sometimes it's part of Applied Phlebotinum, sheer willpower, or some sort of dumb luck of having something else interfere with the effect. It also happens a lot when characters with Super Speed are in play; from their perspective, the world is always moving slowly, so all the time-stopper does is even the playing field. If a time stop is visually represented by the user's surroundings going monochrome or negative, expect this character to return to their normal colour. May come with an Imminent Danger Clue in the form of a "frozen" person's fingers or eyes moving slightly.

If a video game player character can stop/slow down time, expect it to not work on bosses or Kung Fu Proof Mooks.

A Sub-Trope of Anti-Magic. See also Ripple-Proof Memory for the ability to recall events that should have changed with time travel or temporal reset.

Note that this is specifically when moving while time is frozen is a separate power from freezing time itself. Otherwise it's simply Required Secondary Powers for Time Stands Still, and thus belongs on that page.