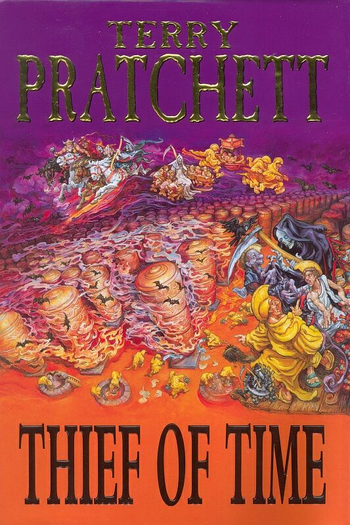 The 26th Discworld novel. The fifth in the Death/Susan theme, although they are not the main protagonists of the story.

The Auditors of Reality are at it again. This time, they plot to stop time and therefore all the messiness of life, freezing it perfectly. To do so, they approach a driven, unstable watchmaker called Jeremy Clockson - so called because he was a foundling of the Clockmaker's Guild - to build, or rather rebuild, the Glass Clock of Bad Schüschein. This Clock, built by a Mad Scientist, previously stopped time briefly before breaking and then shattered history, causing the History Monks to have to put it back together imperfectly (and incidentally explaining all the Discworld series' continuity errors). Its existence survives only in a fairytale and the memory of an Igor, the grandson of the one who helped build the Clock. In order to interact with Jeremy, an Auditor makes a human body and inhabits it under the alias Lady Myria Lejean, but in the process finds herself losing her former nature and becoming addicted to life.

Meanwhile, another foundling called Lobsang Ludd has been taken away by the History Monks and is taught their disciplines - chiefly chronological kung fu. A difficult but know-it-all student, he is apprenticed to Lu-Tze (from Small Gods), spoken of with fear yet claiming to be only a simple sweeper, and thus outside the system. Via their Mandala, the monks learn of the attempt to reconstruct the Glass Clock, and know that this time there's no hope of repairing history if it strikes. Merely a birth pang of the coming doom causes the room of Procrastinators (time manipulating machines) to go haywire, yet Lobsang somehow instinctively calms them. Lu-Tze, who failed to stop the first clock, is put on the case by the Abbot, a serial reincarnator currently in the body of a baby. He and Lobsang journey down towards Ankh-Morpork...

And meanwhile, Death has a job of his own: mustering the other three Horsemen of the Apocalypse, and recruiting his granddaughter Susan to intervene so the Apocalypse won't happen at all.

Preceded by The Truth, followed by Night Watch. The inciting incident of Night Watch is directly caused by the climax of Thief of Time, so these books are closely connected, despite being part of different "series." This is the final novel to feature cover art by Josh Kirby, who would pass away before Night Watch was published. Paul Kidby would take on the role of cover artist for the rest of the series.

Preceded in the Death/Susan subseries by Hogfather.

Not related to the potential Class/Aspect pair.

Thief of Time provides examples of: