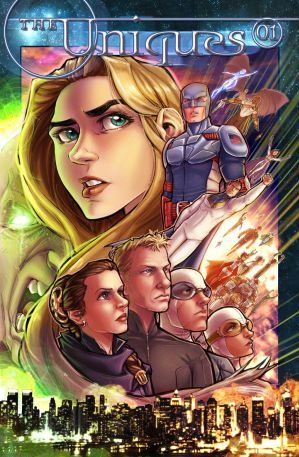 Most of the characters on this cover are dead before the story even begins
Advertisement:

The Uniques is an ongoing superhero comic book series by husband and wife creative team Comfort Love and Adam Withers. Set in a world where people with superpowers, known as "Uniques" are commonplace, but genuine superheroes are rare, with most having been killed in a Supervillain attack on New York City in 1994. The series focuses on Hope Sage, the daughter of famed superheroes Mentor and Kinetic, who awakens from a two-year coma to find that she's the last psychic alive on the entire planet. As she comes to terms with her parents' deaths in the attack on New York city, she begins assembling her own superhero team to be the beacon of hope people need in these dark times.

The series is organized into 10 issue arcs, referred to as "seasons". The writers have planned for the story to continue for a total of ten seasons, by which point the protagonists will all be in their forties and fifties.

The Uniques provides examples of: