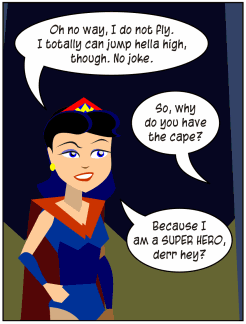 If you are a superhero (whether main hero, Sidekick, or even just part of a heroic army), odds are you wear a cape.

Okay, not really that likely anymore, especially since the Silver Age, but capes are a typical thing for superheroes.

The reason for the cape goes back to the first Comic Book Super Heroes. Most prominently, Superman's outfit specifically mimics that of early 20th-century circus strongmen, who often wore a similar cape/singlet design as a costume. Their simple bold colors were also conveniently easy to reproduce in early print comics.

Capes have long been a feature of comics and animation, as these media both work through visuals while allowing the creators to control the character's environment. Thus, any capes used can always be made to look cool. They were a particular feature of the golden age of superheroes. In fact, the image of a superhero wearing a cape is so distinct that even the detractors of the genre point it out in their main insult directed towards fans of superhero stuff - "capeshit".

In the modern era (late 20th to 21st century) there's been a trend against them, due to becoming something of a Dead Horse Trope and because of some awareness of the practical downsides. Most Marvel heroes are capeless, for example. The ones that do wear them tend to have some combination of otherworldliness, moral ambiguity and a less physical method of attack than others.

On the other hand, capes have remained very popular with villains, especially the most important ones. This relates to Evil Is Cool.

By and large, if any character wears a cape, and it's not a historical or pseudo-historical setting, it should be taken as read that he is either very powerful/important (and probably a villain), or a vainglorious dolt with an inflated opinion of himself. Bonus points if you've got a huge collar and shoulderpads as well. Some rare ones would even be a Pimped-Out Cape.

Not to be confused with The Cape (which is a character type) or Curtain Clothing (which the page quote implies).