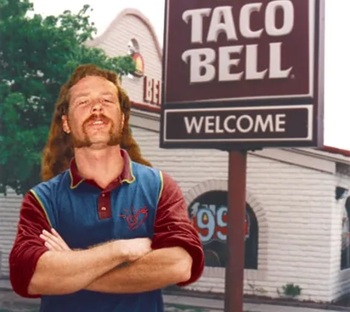 Would you buy a taco from James Hetfield?
Advertisement:

Sometimes writers of counterfactual stories decide to disregard plausibility in order to throw in their stories cameos by historical figures from our own timeline but in a totally different occupation. Usually this is done as something of an in-joke with the audience or the dimension-hopping character(s); seeing Adolf Hitler as a Starving Artist instead of the tyrannical dictator he was in real life would tickle anyone's funny bone. Adolf Hitler actually aspired to be an artist prior to getting into politics; he was an avid fan of Disney and was rejected (twice) by an art school. That said, the cameo doesn't need to have a root in history, but it's more fun if they do. After all, who doesn't appreciate a good Historical In-Joke?

The Trope Namer is from Harry Turtledove's alternate history novel The Two Georges, where Richard Nixon is a successful used car salesman in the North American Union. That itself was a joke about a 1960 Democratic campaign poster, showing Nixon with a Kubrick Stare and the caption "Would YOU buy a used car from this man?" Funnily enough, Nixon's parents did own a gas station when he was growing up, so him going into the auto industry instead of politics isn't too implausible.

Related to In Spite of a Nail. A subtrope of Allohistorical Allusion. Compare with Different World, Different Movies and Beethoven Was an Alien Spy.

Later events would make him wish he were an oil tycoon like his real life counterpart described by the dimensionally-displaced children.

Later events would make him wish he were an oil tycoon like his real life counterpart described by the dimensionally-displaced children.