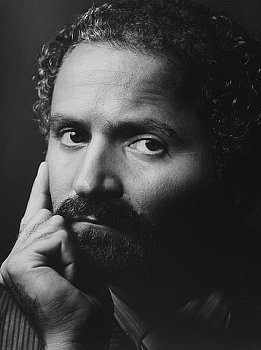 Giovanni Maria "Gianni" Versace (December 2, 1946 - July 15, 1997) was an Italian Fashion Designer whose flamboyant and outrageous styles helped define celebrity culture of The '90s. His body conscious dresses were favorites of celebrities, actresses and models such as Naomi Campbell, Madonna, Elizabeth Hurley and Princess Diana. His menswear was favored by people like Elton John and the members of Duran Duran. Openly gay at a time when many prominent members of the LGBT community were still closeted, Versace became a gay icon.

Versace's success came concurrently with the anti-fashion grunge movement in the USA as well as the rise of more elegant and conservative Italian designer Giorgio Armani. Versace found success by going against those grains and designing colorful and sexy clothes inspired by his home country's classical period. His most famous creation is probably the black dress worn by Hurley to the 1994 movie premiere of Four Weddings and a Funeral, dubbed THAT Dress!

by the press, noticeable by being held together by several oversized gold safety pins. Often derided by critics as trashy, his collections were beloved by many and his various clothing, jewelry and accessory lines were a smashing success.

He also was a wardrobe designer for films such as Judge Dredd, Showgirls, and To Wong Foo, Thanks for Everything, Julie Newmar.

Versace's prominence as a designer was overshadowed by his murder by a spree killer in 1997, after which he was widely mourned by his family, friends and fans around the world. His sister Donatella Versace took over his brand, and it continues to be a success.

His murder and its aftermath were portrayed in Ryan Murphy's The Assassination of Gianni Versace, which was not authorized by the designer's estate. He was portrayed by actor Édgar Ramírez.