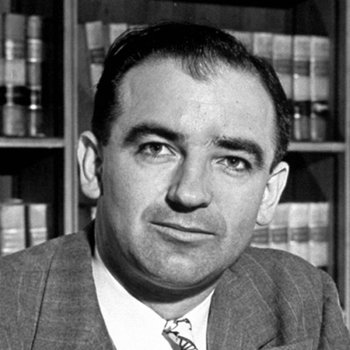 "McCarthyism is Americanism with its sleeves rolled."
"We must not confuse dissent with disloyalty. We must remember always that accusation is not proof and that conviction depends upon evidence and due process of law. We will not walk in fear, one of another. We will not be driven by fear into an age of unreason, if we dig deep in our history and our doctrine, and remember that we are not descended from fearful men — not from men who feared to write, to speak, to associate and to defend causes that were, for the moment, unpopular."
— Edward R. Murrow's attack on McCarthyism

Joseph Raymond "Tailgunner Joe"note He acquired that nickname while serving in World War II. McCarthy (November 14, 1908 – May 2, 1957) was the U.S. Senator who inspired the term "McCarthyism". Said word became (and remains so to this day) a byword for political demagoguery that uses the rhetoric of Witch Hunt, Red Scare, and Patriotic Fervor to undermine the user's opponents by questioning their loyalty to the state and their personal convictions without offering proof. During his lifetime, he tried unsuccessfully to reclaim the label. McCarthy was an extremely anticommunist U.S. senator during The '50s and the term derives from his methods. Due to his status as the icon of the greatest Red Scare in American history, McCarthy is often Mis-blamed for all the excesses of the period.

To be clear, he had nothing to do with Alger Hiss, the Rosenbergs, the House Un-American Activities Committee (HUAC), or The Hollywood Blacklist. HUAC and the blacklist were certainly in the spirit of McCarthyism, but McCarthy wasn’t actually involved in those things. The big clue is that McCarthy was a senator, which is to say, a member of the Senate, whereas HUAC (as its full name suggests) was a committee of the other house of Congress, the House of Representatives. What makes him representative of this era is the fact that these pre-McCarthy investigations were far less controversial (at the time that is, opinions about HUAC, for instance, are far more critical today) and more popular than Tailgunner Joe's antics, and McCarthyism represented the point where elite and public opinion turned solidly against the Red Scare with McCarthy alienating other anti-communists from the hardline platform that they had once advocated, but having been co-opted by McCarthy, were no longer acceptable. McCarthyism is largely a disagreement about means rather than ends (anti-communism remains mainstream and has bipartisan consensus), and the means McCarthy advocated, i.e. militant anti-communist advocacy of political consistency and paranoid overreaction of the same, were not original to him. He simply took it to the extreme and discredited it permanently in American mainstream politics.

McCarthy first rose to prominence in 1950, three years after he became the junior senator from Wisconsin. Prior to that he had been a relatively undistinguished Senator, having earned criticism for supporting corporate subsidies and, bizarrely, accusing American military prosecutors of torturing Nazi SS officers accused of the Malmedy Massacre

into false confessions.note In fairness, McCarthy was responding in part to real, credible accusations of forced confessions, beatings and other abuse against German prisoners of war. However, these specific charges were invented or at least exaggerated, and McCarthy became Snark Bait for harping on the topic long after its falseness became evident. Making a speech in West Virginia, he declared that the U.S. State Department was infested with known communists. The press took notice and launched McCarthy into the national spotlight. At the time, the Democratic Party had been in control of the government for twenty years,note Congress had been controlled by Democrats since 1931 (except for the 1947–49 session), the White House since 1933. under the administrations of Franklin D. Roosevelt and Harry Truman. McCarthy, a Republican, accused the Democratic administrations of perpetrating “twenty years of treason” and, naturally, supported Republican candidate Dwight D. Eisenhower in the 1952 presidential election, which he won. In office, Eisenhower pursued a strongly anticommunist foreign policy, but it wasn’t quite anticommunist enough for McCarthy. A year into Eisenhower’s presidency, McCarthy didn’t like Ike anymore and had updated his Catchphrase to refer to twenty-one years of treason.

During Eisenhower's presidency, McCarthy served on the Senate Committee on Government Operations during which he investigated the Voice of America, the U.S. government's radio program, where he ruined many careers via televised interviews that included highly personal and aggressive interrogation. He, alongside Roy Cohn (who worked as his chief counsel), also monitored the libraries in American embassies overseas and began crusading against books and authors that were considered communist, which eventually led to book burnings by McCarthy supporters at home (McCarthy didn't order any directly, it must be said). McCarthy attacked government employees, librarians and other state officials, codifying the anti-intellectual climate of the time. It became clear that he was burning his bridges when McCarthy's staff director, J. B. Matthews, started claiming that "The largest single group supporting the Communist apparatus in the United States is composed of Protestant Clergymen." Even McCarthy was reluctant to support a potential breach into the First Amendment and many of his fellow senators were taken aback by this attack on the American clergy. While McCarthy is best known for his crusade against communists, he also led a similar crusade against homosexuals, arguing by the Insane Troll Logic that, since homosexuals were vulnerable to blackmail, the USSR could easily use them to spy on the United States and so known and suspected homosexuals had to be ferreted out to gauge their loyalty better. Some historians argue that this “Lavender scare,” as it is called, actually did much more damage than the Red one, as it marked the birth of the first real homophobic policies at a state level. Naturally, the fact that McCarthy's own staffer Roy Cohn turned out to be a closeted homosexual himself only served to tarnish his crusade and reputation posthumously (though Cohn always denied this).

Ultimately, an emerging new medium called television brought McCarthy down. In early 1954, Edward R. Murrow’s See It Now series broadcast an episode condemning McCarthy, a risky move at the time. McCarthy appeared on a later episode to respond, predictably not addressing a single point made against him and instead accusing Murrow of being a communist. That same year, the Army–McCarthy hearings investigated the U.S. Army for potential communist subversion. The television coverage of the hearings gave the American public a good, long look at McCarthy, and they didn’t like what they saw. The Wisconsin senator came off as bullying and the hearings have become known for a Shut Up, Hannibal! moment, when Joseph Welch said, “Let us not assassinate this lad further, Senator, you’ve done enough. Have you no sense of decency, sir? At long last, have you left no sense of decency?” Welch’s words were met with applause from the rest of the room.

After See It Now and the Army–McCarthy hearings, public opinion began to turn against McCarthy. Even some of the most anti-communist Republicans now saw him as a liability and wanted him to Stop Being Stereotypical. That December 2, the Senate voted to censure McCarthy by a 67–22 margin, with six abstentions. The censure received unanimous support from the Democrats present, while the Republicans were split evenly.note Fun fact: the only senator not present for the vote was none other than John F. Kennedy, who was recuperating from back surgery at the time. The Kennedy family was generally friendly to McCarthy, and he was godfather to Robert F. Kennedy's first daughter, Kathleen. Out of family loyalty, JFK tended to avoid speaking about him and refused to denounce him publicly. McCarthy dismissed the censure as inconsequential and declared that it was the result of (you guessed it) communist subversion. He continued to rail against the red menace, but he had lost his nationwide fame and political clout.note Eisenhower quipped that McCarthyism was now “McCarthywasm”. McCarthy began drinking heavily. In 1957, he died at the age of forty-eight, officially from hepatitis, which his alcoholism caused, exacerbated, or both. As McCarthy was still a sitting senator at the time of his death, a special election was held to fill the vacancy in the Senate. Ironically, his seat was taken by William Proxmire, a liberal Democrat and future opponent of The Vietnam War.

History, of course, remembers McCarthy as a wild, paranoid demagogue. At the end of the Cold War, an attempt was made to reconstruct him, with the 1995 release of the Venona papers, which revealed that there were more Soviet agents in the U.S. government than previously believed (though not nearly as many as McCarthy or HUAC argued). The general view is that, if anything, McCarthy’s antics damaged legitimate efforts to locate Soviet agents by making the cause look irrational. (Even in his own time, Presidents Truman and Eisenhower thought so, making similar snarky comments about how the Kremlin might as well put McCarthy on its payroll.) The release of the Mitrokhin documents showed that the KGB shared a similar opinion. McCarthy had a history of mendacity, having doctored his military record to appear more heroic than he was and using that as a cudgel to attack his opponents,note His nickname "Tailgunner Joe" comes from the fact that he had flown on bombing missions as an "observer" but exaggerated that to claim he served as a tailgunner, which he used when he first ran for the Senate in 1946. During that campaign, he accused his opponents, first Bob La Follette Jr. and then Howard McMurray, of war profiteering with no evidence. and when in office, he exploited preexisting anti-communist fervor more than he tried to deal with actual communists competently.