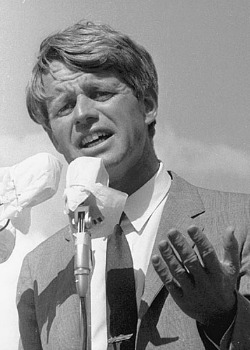 "Each time a man stands up for an ideal, or acts to improve the lot of others, or strikes out against injustice, he sends forth a tiny ripple of hope.

Robert Francis Kennedy (November 20, 1925 – June 6, 1968), also known as Bobby Kennedy or RFK, was one of the younger brothers of U.S. President John F. Kennedy. A politician in his own right, Kennedy was his brother's Attorney General (1961–64) and then a Senator from New York (1965–68). In 1968, while he was campaigning for the Democratic ticket in that year's presidential race, he was assassinated.

He was known for being closer to his still enigmatic brother John than perhaps anyone else. He helped organized JFK's campaigns for the Senate and White House. John was willing to share with Bobby things that he kept hidden from most other people, and he almost always sided with his brother during debates within his administration. After John died, Bobby took care of his sister-in-law Jackie and her children, leading many people to speculate that they had an affair. People also think that, like his brother, he had an affair with Marilyn Monroe, not that there is any substantial proof of either affair.

Whereas John was (initially) hesitant and silent on several issues, Bobby was famously passionate and outspoken from the beginning. At a time when the Democratic Party still drew most of its support from the Deep South, Bobby expressed enthusiastic support for the Civil Rights Movement, sending U.S. Marshals and the National Guard to help activists on several occasions and even bailing Martin Luther King, Jr. out of jail at one point. Organized crime and corrupt unions were two of his main targets as Attorney General, particularly the corrupt Teamsters union led by Jimmy Hoffa. (Several people close to the two assert that he told his brother to cut his family's ties with The Mafia.) During several periods of Cold War tension, John constantly sought out Bobby's advice. It was after Bobby suggested a naval quarantine of Cuba during the Cuban Missile Crisis that John stopped considering an invasion. At the 1964 Democratic National Convention, Bobby delivered a very moving dedication to his departed brother; he was close to tears the entire time. He had secretly hoped that this speech would force Lyndon Johnson, who had succeeded John after his assassination, to nominate him as his running-mate, but by the time Bobby actually gave the speech Hubert Humphrey had already been nominated to that position. After Bobby left his Cabinet position, Congress passed a law preventing any future Presidents from nominating close relatives to high-ranking government offices. Bobby himself, along with his youngest brother Edward M. Kennedy, voted in favor of the law.

He remained just as vocal when he became a Senator following John's assassination. Notably, he was among the first to speak out against President Johnson's escalation of The Vietnam War and he held firm in his support for the Civil Rights Movement. During a visit to South Africa in 1966, Bobby delivered a speech that was highly critical of the apartheid regime, which makes him very well liked over there to this day. He also became the first person to climb Mount Kennedy, which was named in John's honor.

When Johnson announced in early 1968 that he would not seek another term as President, Bobby threw in his name for the Democratic primary at the last minute. He ran on a platform involving more help for the Civil Rights Movement, more aid to the impoverished, and, most famously, an end to the unpopular war in Vietnam. Despite its late start, the RFK campaign did fantastically well, with his active on-the-streets campaigning endearing him to many voters. When he heard just before a campaign rally that King had recently been assassinated, he delivered a largely improvised speech that remains his best moment. Two months later, Robert was himself assassinated. This came on night after he won the California primary and thus looked as though he stood a chance of winning the Democratic nomination. The convicted killer was Sirhan B. Sirhan, a Palestinian man who passionately opposed Kennedy's support of Israel; Kennedy's death marked the first time the Arab-Israeli conflict had a direct and immediate impact on the United States. For what it is worth, Sirhan is still alive and rightfully in prison, though claims to have no memory of the event. Like the assassination of his older brother, there are many conspiracy theories about his death and the mysterious circumstances around it.

Like John, Bobby is a very beloved figure for many people who lived through the turmoil of The '60s. Arguably even more so than his brother, Bobby had the ability to inspire hope during what he described euphemistically as "interesting times." Even many cynics who don't buy into the Camelot mythology surrounding his brother have very positive things to say about Bobby. Ever since his death, there has been endless What Could Have Been discussion surrounding him and his possible presidency, especially in light of his ability to unite Americans across all lines imaginable, a sharp contrast to the increasing polarization of the decades that followed his murder.note Most of this alternative history overlooks that Kennedy probably would not have won the nomination in 1968. Vice President Hubert Humphrey had the support of President Johnson and all the Democratic Party institutions, and the anti-war left was split between Kennedy and Eugene McCarthy. And even if Bobby had somehow won the nomination, the Democrats would've struggled in the election anyway, because there was such an intense backlash to Vietnam, and the traditional white Southern Democratic bloc had split apart, with much of it supporting the third-party candidacy of Alabama governor George Wallace (who carried five states), while Nixon's infamous "Southern strategy" attracted a fair share of voters by pandering to worries over racial and cultural issues. With Nixon only beating by Humphrey by 500,000 votes, Bobby might've been able to win the popular vote, but Nixon probably still would've comfortably taken the Electoral College. However, President RFK is an interesting what-if, and the possibility of him winning the nomination was taken seriously enough at the time for Humphrey's eventually winning it to be written off by many as him merely winning by default after Kennedy's death, ending up as one of many factors which crippled Humphrey's presidential run from the get-go. To this day, he's something of a lost hero for the Democratic Party — a handsome, popular firebrand who had united people of color and the white working class under his banner, something his successors have struggled to do in the decades since his death.

District of Columbia Stadium, the then-home of Washington D.C.'s sports teams, was renamed Robert F. Kennedy Memorial Stadium in 1969, just a year after his death. 40 years after his death, in 2008, the Triborough Bridge in New York City was renamed to honor him as well.

RFK in other media:

Has anybody here seen my old friend Bobby, Can you tell me where he's gone,
I thought I saw him walking off over the hill, with Abraham, Martin and John.
Feedback