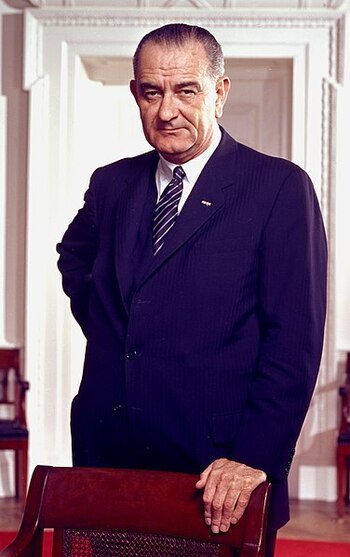 "Being president is like being a jackass in a hailstorm. There's nothing to do but to stand there and take it."
"If one morning I walked on top of the water across the Potomac River, the headline that afternoon would read: 'President Can't Swim.'"
— Lyndon Johnson
Advertisement:

Lyndon Baines Johnson (August 27, 1908 – January 22, 1973), often referred to by his initials of LBJ, was the 36th President of the United States (1963–69). The thirteenth President from the Democratic Party, he inherited the office following the tragic assassination of the young and inspirational John F. Kennedy and was followed by the honest and lovable Richard Nixon. He managed to be both incredibly good for his domestic reforms (legislation upholding civil rights, Medicare, Medicaid, aid to education, the arts, urban and rural development and public services) and horrendously bad for what he did abroad (escalating American involvement in The Vietnam War). Ultimately his foreign policy mistakes came to threaten or even negate his domestic achievements, to the chagrin of liberals throughout the USA who continue to fight for much of what Johnson fought for.

Johnson grew up the oldest of five children in the desperately poor Hill Country of central Texas. His father, Samuel, came from a long line of farmers. Sam Johnson had big dreams of being a lawyer but never finished high school because of an illness and lack of money. He was able to get certified as a teacher and even served in the Texas state legislature at two different points note  He served in his mid twenties but couldn’t afford to go back and forth to Austin so he didn’t run again and then he served a decade later during World War I when they needed someone to fill the seat when the representative got drafted but was held back from climbing further out of lack of a formal education. His mother, Rebekah, was from a family of Baptist ministers and had a college degree, a rarity at the time for a woman. She was a teacher as well. Both of his parents instilled a love of learning and politics into him from a young age that stayed with him for the rest of his life.

By the time he graduated high school at 16, he applied to college but was rejected. He moved to California for a couple of years to work for an uncle to save money to go to college, reapplied, and was accepted. He taught for a few years after graduating but, after getting assigned to a desperately poor school for the children of Mexican migrant workers, decided his talents lay elsewhere and got a job working for his Congressman. He then served in state government, and when the seat in Congress opened up, he ran and won in 1937. He was the first member of Congress to volunteer to fight in World War II and was stationed in the South Pacific. He was released from active duty in 1942 but stayed on as a member of the reserves until he was president.

Johnson was a colorful figure whose rough-edged Texan demeanor contrasted strongly with Kennedy's elegant image. One incident had him exposing his appendicitis scar to the public; in another he picked up his pet beagle by the ears, assuring the onlookers, "He lahks it!" He had odd eating habits, eating quickly and, if someone near him hasn't finished eating yet, taking their food to eat, as if it was nothing out of the ordinary. From his time in the Senate, he had a rather bullying and forceful personality when he wanted to make somebody come to his point of view. Perhaps his oddest habit was conducting meetings on the toilet (one of the best nonsexual examples of Coitus Uninterruptus). Or maybe his oddest habit was pulling his penis—named "Jumbo"—out in front of the White House Press Corps and waving it around. Still, he sometimes had moments of sympathy that shocked those close to him: After he was sworn in on Air Force One, he called Kennedy's mother to try and comfort her. Satirical portrayals in media usually focused on playing up his Texan-ness to a comical degree. Oh, he was also a big fan of Simon & Garfunkel's Bridge Over Troubled Water.

He spent quite a bit of time on working vacations to his home state of Texas, to the point where his ranch house in Fredericksburg became known as the "Western White House" and featured, among other things, an office suite for his staff, a commercial kitchen capable of supporting his family, staffers, and security detail, a telephone setup that put phones within reach of any given chair he might be in no matter what room of the house he was in, an airstrip, and a hangar for the small Lockheed VC-140 JetStar, called "Air Force One Half" which he'd use to travel to and from San Antonio (Air Force One, a Boeing 707, was far too large to land at Fredericksburg). This was on top of the three TVs in every room so that he could watch every news channel simultaneously (an arrangement copied by Elvis Presley at Graceland). Much to his wife's ongoing chagrin, he was prone to holding cabinet meetings in their bedroom at all hours of the night whenever a situation would arise, often with her not knowing about it until she would wake up in the middle of a meeting. The Western White House now serves as an LBJ museum, with many artifacts from his time there on display (including Air Force One Half and his Amphicar).