Film / We Were Soldiers 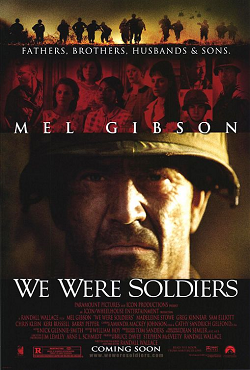 A 2002 war drama directed by Randall Wallace, set in the The Vietnam War and focusing on the Real Life campaign of the 1st Battalion, 7th Cavalry (cavalry with helicopters, not horses, that is) in the Ia Drang valley in 1965, the first major battle between the United States and North Vietnam.

Lieutenant Colonel Hal Moore (Mel Gibson) has to lead a battalion of 400 American soldiers against a force of 2,000 North Vietnamese troops.

Adapted from the 1992 nonfiction book We Were Soldiers Once... and Young, the film is notable in that, unlike most works about the Vietnam War, it portrays both sides sympathetically and nobly.