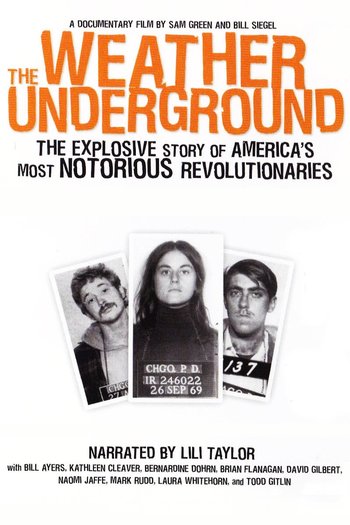 The Weather Underground is a 2002 documentary feature directed by Sam Green and Bill Siegel.

It is an account of the eponymous Weather Underground

, aka Weathermen, a leftist terrorist organization active in the 1960s and 1970s. The Weather Underground is born out of the Students for a Democratic Society

, a non-violent student activist group formed to work for civil rights and against The Vietnam War. As the '60s drag on and the violence in Vietnam continues unabated, the radical faction within the SDS comes to believe that more direct action is necessary.

Matters come to a head at the 1969 convention of the SDS, where the radicals split off from the main SDS movement. As the revolution fails to happen and the Vietnam War fails to end, one faction, calling itself the Weathermen/Weather Underground, resolves to take the violence of Vietnam home to America. Thus begins a campaign of bombing and terrorism. Compare Guerrilla: The Taking Of Patty Hearst, a similar film about the Symbionese Liberation Army (SLA), their kidnapping of the Hearst heiress, and her joining them.