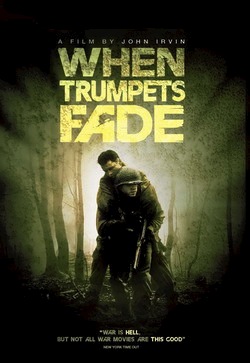 When Trumpets Fade is a 1998 HBO World War II film directed by John Irvin (Hamburger Hill), the script of which was discovered by Steven Spielberg (who directed that other 1998 WWII movie and produced those other HBO WWII series). Set during the Battle of the Hurtgen Forest in November 1944, the film underlines its heavy casualties and relative obscurity (compared to the subsequent Battle of the Bulge), but is not based on specific details of the campaign. Instead it follows the Character Development of antihero Sergeant Manning, whose attempts to escape the battle ironically only expose his competence and lead him into escalating exploits.

Private David Manning, carrying a wounded comrade in from the line, finds himself the Sole Survivor of his platoon's week in the Hurtgen Forest. This is sufficient reason for Captain Pritchett, whose company has sustained 75% casualties, to give Manning not the psychological discharge he begs for, but a promotion. Placed, to general misgivings, in charge of a squad of naive replacements, Manning makes a deal with Pritchett: he will knock out the artillery threatening the assault on a critical bridge in return for a Section 8.

As the tagline "In the heat of battle, not all soldiers can be heroes" suggests, When Trumpets Fade is set unusually far to the nihilistic end of the Sliding Scale of Idealism Versus Cynicism for an American World War Two film, subverting redemptive tropes like the Band of Brothers and No One Gets Left Behind through the figure of its ambiguous protagonist.

When Trumpets Fade contains examples of: