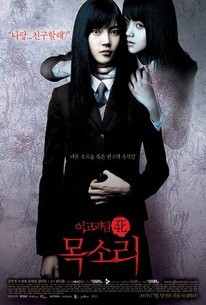 Whispering Corridors is a Korean horror film directed by Park Ki-Hyung in 1998 about a series of unexplained murders committed by a ghost. Eun-Young, a former student turned teacher, investigates the murders after Mrs. Park, a fellow teacher calls her about Jin-ju, a former friend of Eun-Young's. Three students, Ji-oh (an art student), Jae-yi (a shy student), and Jung-sook (a strange and unpopular student), doing morning janitorial duties find her body hanging from a tree. Although her death looks like a suicide, rumors fly around the school that Jin-ju, an unpopular student who died years ago is back to take revenge on the teachers who tormented her. Eun-young and the three students get caught up in the dark secrets of the school and must stop the ghost before she commits another murder.