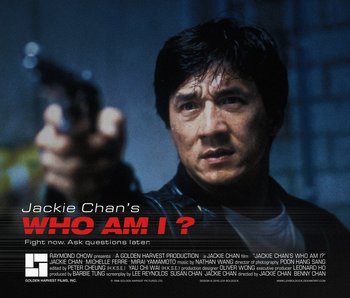 Who Am I? is a Hong Kong action comedy film produced by Golden Harvest and released in January 10th, 1998. It was Written, Co-Directed (with Benny Chan), And Starring Jackie Chan. He also provides the vocals for the Ending Song.

A multinational Special Forces Team is assigned to ambush a group of scientists deep in South Africa, who have just discovered a meteorite that is highly volatile (as seen in the opening prologue). Then the team is double-crossed by their higher-ups who want to use the meteor for purposes less than noble. All of the operatives soon disappeared in an accident...well, except one.

The lone survivor (Jackie Chan) wakes up somewhere in the hut of a tribe, but he can't remember who he is. The members of the tribe decide to call him "Who Am I?" after he asks just that. After spending weeks recovering from his injuries, he spots a nearby rally competition, so he decides to return to civilization to embark in a Quest for Identity. After saving the life of the brother of a racer (Mirai Yamamoto) from the competition, "Who Am I?" is soon pursued by multiple parties including the higher-ups (who fear that He Knows Too Much), the CIA, and a female reporter (Michelle Ferre) who wants to know all about "Who Am I?".

Yes, this is the movie where Jackie Chan slides down a building almost to the ground, without any safety harness!

Not to be confused with the 2014 German film of the same name.

Who Am I? provides examples of the following tropes:

Christine is with the CIA

After "Who Am I?" discovers the gun disguised as a camera in her purse, journalist Christine Stark reveals that she is an undercover CIA agent who tapped his calls.

Christine is with the CIA

After "Who Am I?" discovers the gun disguised as a camera in her purse, journalist Christine Stark reveals that she is an undercover CIA agent who tapped his calls.