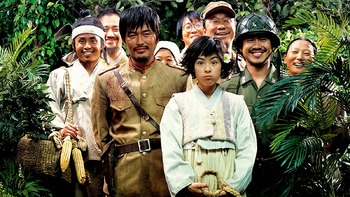 Welcome to Dongmakgol is a 2005 film from South Korea, directed by Park Kwang-hyun.

It is set in September 1950, during The Korean War, after the American landing at Incheon sent the North Koreans into headlong retreat but before the Chinese intervention. An American pilot, Lt. Smith, crashes his plane somewhere in the mountains of the peninsula. A squad of desperate North Korean soldiers is also retreating through the mountains; after they blunder into a South Korean ambush, only three men—Jang Young-hee, Seo Taek-gi, and their officer Lee Soo-hwa—are left alive. Meanwhile, South Korean medic Moon Sang-sang, who has deserted from his unit, is wandering through the woods, and finds another deserter, South Korean Lt. Pyo Hyun-chul.

Lt. Smith has been rescued from his plane by the villagers of Dongmakgol, an isolated community high in the mountains. Dongmakgol is so remote that the people of the village not only have no idea a war is on, they don't even know what rifles and grenades are (they take them for "sticks" and painted potatoes, respectively). The North Koreans are led to Dongmakgol by Yeo-il (Kang Hye-jung, Mi-do from Oldboy), an odd girl who seems to spend most of her time wandering around the forest. The South Korean soldiers wander in to the village on their own. A long standoff occurs once they meet each other, but eventually they become friends and integrate with the villagers. That fragile peace, however, is disturbed by the U.S. Army soldiers looking for Lt. Smith.