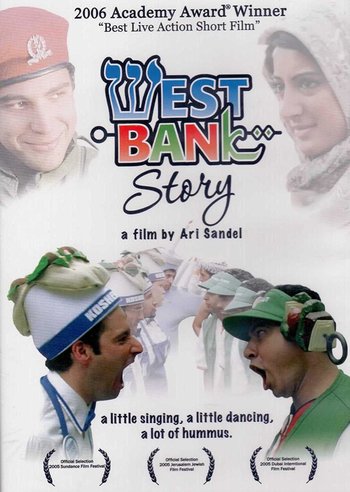 West Bank Story is a short musical comedy film from 2005, directed by Ari Sandel. In 2006 it won the Academy Award for Best Live Action Short Film.

The film is an Affectionate Parody of West Side Story set in the context of the Arab–Israeli Conflict. As such, follows the Romeo and Juliet story of Fatima, a Muslim restaurant employee, and David, a Jewish soldier, who are the close relatives of the antagonistic owners of two falafel restaurants in the West Bank: respectively, the Palestinian "Hummus Hut" and the Israeli "Kosher King". As David and Fatima's romance blossoms, the conflict between the two factions comes to a head. This being a comedy, however, the story resolves on a more positive note than its predecessor.