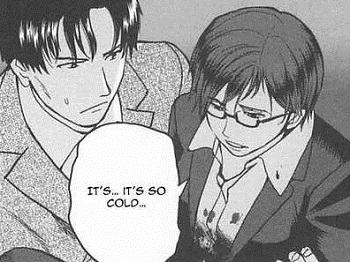 They're right to be bothered: saying "I'm cold" means that a character is seriously unwell. It can be a sign that a character will be Killed Off for Real and these are their Last Words. When a new, unknown character says this it can even mean that they are a ghost. This is also something dead people are traditionally expected to tell anyone they talk to on the telephone.

This is because death... is cold.

There's sense in the trope: cold skin is a sign of shock. Coldness can also indicate blood loss or impaired blood circulation and, of course, corpses lack body-warmth. Additionally, a person suffering from a rising fever will feel cold and shiver. A mythological reason might be that Purgatory (which can sometimes include wandering the earth as a ghost) was depicted as being a cold and miserably damp place. Sleepiness or Blood from the Mouth tend to go hand in hand with this. Perversely, one emergency that often does not feature this is hypothermia: cold becomes an emergency if the victim stops being able to feel it, or is too tired to shiver. In fact, exposure victims are often found partly undressed because the lowering of their internal temperature makes them feel too warm.

A sister trope, also due to the above, is Dangerous Drowsiness, which may be rendered as "I'm tired...so tired."

Is dangerously on the verge of becoming Narm.

See Evil Is Deathly Cold for a motif. Compare Ghostly Chill; and see Incurable Cough of Death for another example of a symptom which is moderate in Real Life but presented as a sure sign of death in the world of tropes.