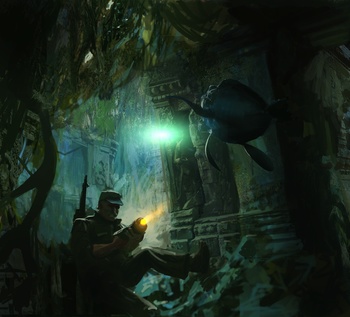 Pathways into Darkness is a first-person adventure game for the Mac by Bungie (of Halo fame) that casts the player as a member of a U.S. Army Special Forces team on a mission to prevent an ancient godlike being from awakening in eight days and destroying the Earth. The team must enter a pyramid on the Yucatan Peninsula of Mexico, reach the bottom level and detonate a nuke to stun the Dreaming God within, giving the Jjaro, a benevolent alien race, the time it needs to take more permanent measures to neutralize the threat.

However, during the team's deployment, the player character's chute fails to open, and the resultant impact knocks him out and scatters his equipment. When he comes to, he discovers that he is believed dead, and his team has entered the pyramid without him. Alone, and armed only with a flashlight and a survival knife, he must battle his way through the monster-inhabited pyramid, making his way down to the bottom to complete his team's mission.

Pathways into Darkness is notable for being the first texture-mapped game on the Apple Macintosh, as well as being considered the first true First-Person Shooter released on that platform. It was critically acclaimed, winning a large number of awards, and was Bungie's first major commercial success (it was the third-best-selling Mac game of the first half of 1994, after Myst and SimCity 2000).

In April 2013, a version running on modern Macs was released for free in the Mac App Store

. It has also been ported - quite faithfully overall - to the Aleph One

source port of Marathon 2; you can find this version here

, along with high-definition graphics

. This will probably be the most convenient way to play it for Windows or Linux users.