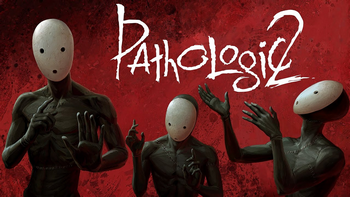 Pathologic 2 is the sequel-remake to the 2005 Pathologic, developed by Ice-Pick Lodge. Much like its predecessor the style and genre is a bit iffy to describe, and is perhaps best described as a First-Person Survival Horror Adventure Game with some light Immersive Sim and RPG Elements. The game was released for PC on May 23, 2019.
Advertisement:

Development began when Ice-Pick Lodge launched a Kickstarter campaign to create a successor of the original Pathologic in September 2014. The final result came to be named, although it is not a plot sequel, instead retelling the original's story with more content and mechanics, as well as more polished graphics. It is frequently referred to as a "remake", but the developers came to reject this label, instead likening it to how games like Silent Hill 2 and Dark Souls 2 revisit and experiment with the concepts introduced in their predecessors.

A limited demo version, titled Pathologic: The Marble Nest, was released in 2017. It is not an excerpt of the game proper — it's more of a side story branching off late in the game's storyline, and it has an internal progression of its own. (The developers' notes at the beginning of the demo compare it to a short story.) The demo uses early versions of many of the main game's assets and mechanics. The Marble Nest was later remade as a DLC for the final game on October 28, 2019.

Currently, only the Haruspex’s route of Pathologic 2 is available, with the Bachelor and Changeling campaigns releasing sometime later: