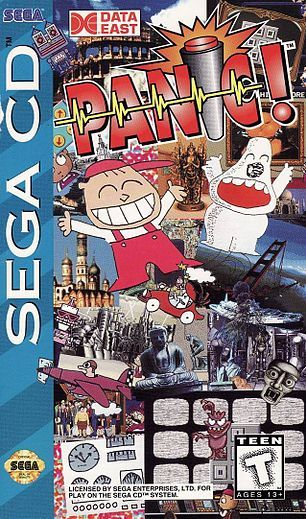 "The most fun you'll have with a CD since you learned those suckers could fly!"
— North American print ad slogan

Panic! (known as Switch! in Japan) is a 1993 game for the Sega CD, developed by Sega and Office Inote That's not a roman numeral. You're supposed to pronounce it as "eye". and published in the United States by Data East USA. It's the story of a boy and his dog, among other things.

Okay, so there's this nasty computer virus that's infected the global network server which somehow controls pretty much everything in the world - and that includes things that aren't even computerized. To stop things from going all ker-flooey, your player character Slap and his dog Stick need to set about fixing the problem. Why? Because the U.N. was busy, that's why.

Anyway, Slap and Stick must do this by manipulating various switches that will take them on a trip through cyberspace to the server and allow them to upload an anti-virus program. Are things making sense so far? Cool, because they're definitely about to stop doing that.

Out of nearly a thousand unmarked switches, there are only a few that will allow you to reach your goal. The rest of them are nothing less than a gateway to madness. The game's style is at times reminiscent of an interactive Terry Gilliam animation, only without anything resembling context nine times out of ten. Some switches will affect things or characters in each scene, others will segue into a bizarre cameo of some odd creature or person saying something even odder, and still others will warp you to new areas, which is how you progress through the game. Oh, and buried in there somewhere are 30 booby-trapped switches that are each wired to destroy a different famous landmark (or, in lieu of that, some random guy's farmhouse or teepee); press all 30 of these and it's game over.

Gameplay-wise, there's not much to tell; you press a button, weird things happen, and your eyes immediately start insisting to your brain that yes; they really did just see that shit.

The game was later ported to the PS2 with some minor Bowdlerization involving the booby traps, but luckily, if you don't mind just having the CD, you can comfortably get the US version with it being priced at around $20 as of this writing. If you want a complete US version, well... Importing a complete Japanese copy is not as strenuous on your wallet for one game, but if you want to see what's going on before a purchase, there is an awesome Let's Play of this done by a Mr. Frankomatic of YouTube here

that provides the gist of the game.