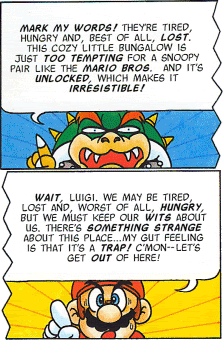 A mode of exposition where the camera switches between two groups of people as they receive the same information.

Lines of dialogue carry across the two scenes, sometimes to the point of the two scenes answering the other's questions or even Finishing Each Other's Sentences. For example:

Bonus points if those sentences are going in completely different directions, a la Shrek 2.

A variation seen in romances, usually just after He and She meet for the first time, has the camera switching between Her telling her friend(s) about Him, and Him telling his friend(s) about Her. Often, humor is generated by highlighting discrepancies between their accounts.

Anime often mixes this with Inaction Sequence and the Combat Commentator. It's not uncommon for Loads and Loads of Characters scattered far and wide to have the exact same conversation, explaining what's happening to the audience.

Shrek, Fiona & Fiona's parents walk up to meet each other, but neither Shrek or Harold wants to be there.

Shrek, Fiona & Fiona's parents walk up to meet each other, but neither Shrek or Harold wants to be there.