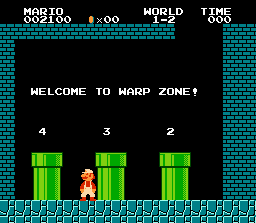 Yes! All worlds are linked, and I travel among them! No, I will not show you how. Such power is not for you, who would cheat through life. True warriors must see all worlds before skipping among them. NOW, TO BATTLE!
— Warping Pipe, Super Paper Mario
Advertisement:

A secret area in a video game (possibly a Debug Room) that allows you to magically teleport to another level, possibly offering you a choice of levels.

This is slightly different in principle from Warp Whistle: the Warp Zone usually takes you on a one-way trip to a later area you otherwise wouldn't be able to visit for some time yet, whereas the Warp Whistle is a faster way to travel between areas you've been to before.

Doesn't count if it's due to a Good Bad Bug. Compare Hub Level.