Not Quite Back to Normal 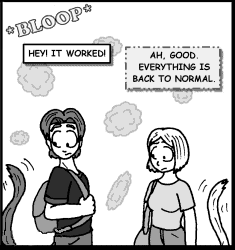 A character is unshackled from a Forced Transformation — changed back from a frog, cured of their lycanthropy, or just had a Gender Bender undone — but after sighing with relief, they slowly realize that they aren't 100% the same as they used to be. And it's not just because they've walked in another creature's shoes and improved as a person.

Maybe their tongue is a bit longer than they remember, and they have this inexplicable hunger for flies. Or they've still got a wolf tail (and all their friends burst into laughter whenever they turn around.) Or, psychologically, they've retained an uncontrollable fear of cats. At any rate, they've got leftovers.

Usually played for laughs (and often an Ending Trope) but it may be a plot point in a greater arc. Brainwash Residue has considerable overlap. See Close-Enough Timeline for the Time Travel equivalent. Some overlap with The Mind Is a Plaything of the Body, where a shapeshifter's mind is altered depending on the form they're in.