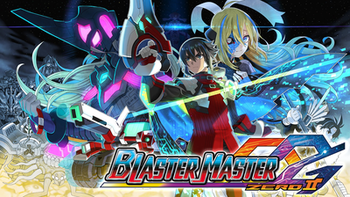 Blast off for a new adventure... IN SPACE!!
Advertisement:

Blaster Master Zero II is the sequel to the 2017 reboot/remake of the Blaster Master series, Blaster Master Zero, for the Nintendo Switch. Developed once again by Inti Creates, Zero II was revealed during a Nindies Direct episode of Nintendo Direct on March 20th, 2019 and subsequently released the same day. A version for PC was released on November 29th, 2019 on Steam. A PlayStation 4 version was released on June 29, 2020. Versions for the Xbox One and Xbox Series X|S came out on July 15, 2021.

At the end of Zero, Jason eradicated the mutant threat on Earth, saving the SOPHIA-III's Support Droid "Eve" and the planet. Unfortunately, despite their newfound peace, a new threat has emerged: leftover mutant cells from the mutant parasite that infected Eve's body during the climax of their previous adventure have started corrupting her body, slowly transforming her into a mutant. With no hope of a cure on Earth, Jason and Eve (with Fred) decide to board Jason's new SOPHIA unit, the EARTH MA-001 "GAIA-SOPHIA" (G-SOPHIA) and embark on an intergalactic mission to Eve's home planet, Sophia, in hopes of finding a cure.

However, Jason soon discovers that they aren't alone in the mutant war. After the creation of SOPHIA-III, Sophia deployed their Metal Attacker units across the galaxy in hopes of assisting other planets in destroying the mutants once and for all. During their journey, Jason and Eve will encounter other Metal Attackers and their pilots, but not all of them are friendly. Who can they trust in this new journey?

While the core gameplay of Blaster Master hasn't changed from the previous installment, Zero II is one of the most ambitious installments yet; the scope of exploration has expanded from a single planet to an entire galaxy, using the G-SOPHIA as a method of space travel. Both Jason and the G-SOPHIA are equipped with brand-new, unique armaments never before seen in a Blaster Master game, and both are armed with new abilities. The G-SOPHIA wields the GAIA-System, which enables it to convert hard landings and enemy damage into Subweapon Gauge, and Jason can fight dungeon enemies with the new Blast Counter attack, enabling him to strike back against aggressive enemies.

Beyond the addition of new playable EX Characters, in 2020 the game received a paid DLC called "Kanna Raising Simulator". In this sub-mode starring the titular busty plant-girl from Planet Stranga, the player is tasked with harvesting materials through top-down minigames to grow and collect several different varieties of Kanna, each with unique designs and flavor text.