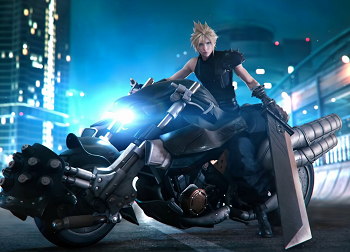 "Bikes are not 'nice'. Bikes are cool."
— Fonzie to Richie, Happy Days
Advertisement:

So you've got a badass. Or a loner. Or an Action Hero or Action Girl. Now (s)he needs a suitable way to get from Point A to Point B. Because walking isn't very impressive unless you're calmly walking away from the carnage you just caused, or power walking toward the carnage you intend to cause.

Now you could always go for a cool-looking car. But how about something more personal, and much more impressive?

Easy. Give them a Cool Bike. No, not a bicycle. The big, shiny, loud, sexy, purely awesome motorcycle. The motorcycle is to a modern character what the big black horse is to the Western or Fantasy character: an identifier, a mark of status, and above all, an accessory that adds to their overall coolness.

Ever since the end of World War Two, motorcycles have been seen as the absolute coolest way to travel. Whether they are traveling through the desert, city streets, a coastal road, or up a wall, the bike can promote an aura of awesome that is unmatched by an other everyday vehicle. Riding a motorcycle lends an aura of independence and attractive danger to the rider.

Cool Bikes come in different types, and the type of bike generally says a lot about the type of character who rides it. A chopped, stripped Harley is virtually almost always the choice of a Badass Biker, and it's also often the choice of the Sociopathic Hero and the Villain Protagonist, while a sleek crotch rocket is more likely to be ridden by an Action Girl, an older Kid Hero or a Jerk Jock. If the Harley is chopped or stripped or neither, the rider could be The Atoner, The Drifter, a major-league Action Girl, an Action Hero, a Supporting Leader, or The Ace. The Adventurer Archaeologist tends toward the lighter, more nimble dirt bikes, or even better, an old military bike. Big, heavy Goldwings and other touring bikes aren't usually cool, although their riders may think so.

The Badass Biker and the Biker Babe always have a Cool Bike. An Anti-hero is likely to have a Cool Bike. Action Girls may have Cool Bikes. Cool Bikes may also have an accompanying Cool Sidecar attached. See Monowheel Mayhem / One-Wheeled Wonder when awesome only needs one wheel.

Oh, and remember that you don't drive a bike; you ride it.

The remains of the demonic knight Cavaliere Angelo fused to a motorbike, giving Dante a weapon he can use to reduce his enemies to roadkill.

The remains of the demonic knight Cavaliere Angelo fused to a motorbike, giving Dante a weapon he can use to reduce his enemies to roadkill.