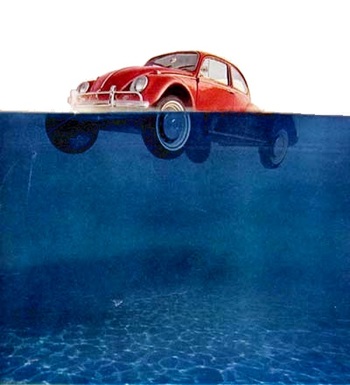 In real life, cars tend to sink in water. This however, can be averted in fiction (and in Real Life). This trope applies whether a normal car can inexplicably float or work as a submarine, or a modified car can do this (more realistic). These can overlap with Cool Car, the Alleged Car, and What a Piece of Junk.

Sub-Trope of We Don't Need Roads. Sister Trope to Flying Car, though making a car float on water is much easier than making it fly. Can be achieved by a Transforming Vehicle. Contrast Ship Out of Water.