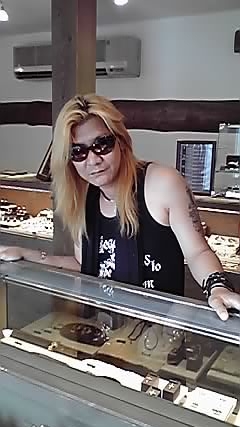 Taiji checking out the family jewels
Taiji Sawada (July 12, 1966 – July 17, 2011), known by his given name/stage name Taiji, was a Japanese rock musician who played bass guitar and guitar, as well as being a prolific songwriter. Having been in a number of famous Japanese rock and metal bands, he was best known for his work with X Japan and with Loudness. While in X Japan, he co-wrote several songs, developed Toshi's "french fries" mohawk hair style, and heavily contributed otherwise toward the band's musical skill and lyrical and stylistic focus.
Advertisement:

He left X Japan in 1992 due to musical differences and a fight with Yoshiki, and proceeded to play with Loudness, leave Loudness to form his own off-and-on band D.T.R., and experienced a major Creator Breakdown due to a variety of issues he'd struggled with throughout his life. He slowly returned from his Creator Breakdown to play with the soon-to-be-disbanded D.T.R., Otokaze, Kings, and with The Killing Red Addiction and TAIJI WITH HEAVEN'S.

Taiji was (and is) considered in some circles to be among the world's top rock bass players. Especially skilled at slapping and tapping, he was credited with teaching the late X Japan and solo guitarist hide his own guitar tapping technique back when they played together.

In 2009, he dissolved D.T.R., firing all but one of his bandmates claiming a copyright issue, and claiming that he was going to reform D.T.R. as Death To Rive. He played with The Killing Red Addiction (members Dynamite Tommy [v], Kenzi [d], Taiji [b], Tatsu [g]), played with his solo act "TAIJI WITH HEAVEN'S," which became Taiji Sawada Project, then Taiji and Shu Project (TSP) (members Taiji [b], Shu [g], Takanari [d] who was replaced with Hina from Crazy Danger Mile on drums) and as a session musician with other bands including a return to Loudness for the Munetaka Higuchi memorial shows in 2009 and 2010.

In July 2010, Taiji rejoined X Japan as a bassist, playing on stage at the Yokohama Nissan Stadium reunion live, though he did not join X Japan for the North American tour. He had also been a model and jewelry designer for Arizona Freedom, a Japanese rock couture house, and also played with Loudness at the 2009 and 2010 memorial concerts for Munetaka Higuchi. He had planned for a return to the rock scene with Taiji and Shu Project...

In 2011, he got into a fight with his manager on a flight and was arrested for causing a disturbance on a flight. He was alleged to have committed suicide by hanging, dying in custody July 17, 2011, but this cause of death is highly disputed due to witness testimony claiming that he had no neck wounds or bruises. There was pressure to reopen a homicide investigation into his death and the suspicious circumstances.

He is the second member of the original X Japan and the third formation of Loudness each to die.

His music and performances provide examples of