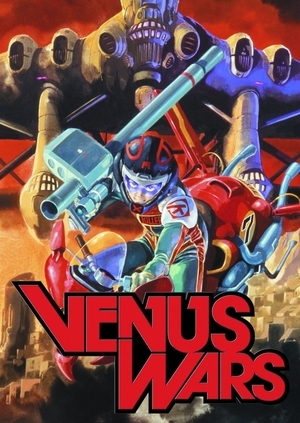 The Venus Wars (ヴイナス戦記 Vinasu Senki) is a Japanese manga series written and illustrated by Yoshikazu Yasuhiko. It was serialized in the Gakken magazine Nora Comics from 1987 to 1990. In 1989, The Venus Wars was adapted into an anime film directed by Yasuhiko, co-written by Yuichi Sasamoto and Yasuhiko, and produced by Bandai Visual, Gakken, and Shochiku.

The manga was translated into English by Dark Horse Comics in the early 1990s. The anime was localized in the United Kingdom by Manga Entertainment and the United States by Central Park Media, gaining recognition when it aired in heavy rotation on the Sci-Fi Channel "Saturday Anime" movie block in the late 1990s. The film was relicensed in 2012 by Discotek Media, who re-released the movie on DVD and Blu-ray, but their rights have since lapsed; it is currently licensed by Sentai Filmworks, as of 2020.

In the year 2003, a comet designated Apollon collides with the planet Venus and disperses much of the planet's atmosphere, adding enough moisture to form acidic seas, and speeding up its rotation to give it a day that matches its year. This event enables humanity to terraform Venus after sending the first manned ships in 2007 and begin colonizing it in 2012. By the year 2089, Venus has a population in the millions and is divided into two separate nation states, the northern continent of Ishtar and the southern continent of Aphrodia. The two countries are on the brink of war just as an Earth reporter, Susan Sommers, lands on Venus looking for her big story on the tension that has arisen from the two nations. As Ishtar suddenly invades Aphrodia's capital city of Io and war breaks out, the team of a Battle Bike Tournament called the Killer Commandos lead by Miranda and hotshot biker Hiro Seno are also drawn into the mayhem. They eventually run into Sue as they look to escape the war-torn city. Venus Wars follows the struggle of members of the team trying to survive the war after forcefully being drafted into the Aphrodian army and Sue navigating through the chaos to get her scoop.

Both the Manga and the Anime movie provide examples of: