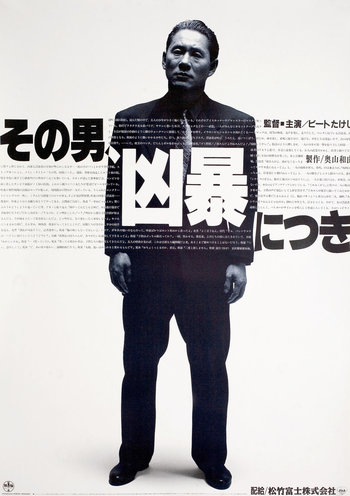 Violent Cop is a 1989 film by Japanese filmmaker Takeshi Kitano, as well as his directorial debut.

Opening up with the beating of a homeless person by a group of kids, we later see detective Azuma (played by Kitano himself) going at the house of one of the delinquents and violently threatening him to denounce himself. This scene illustrates the character of Azuma and how the rest of the film unfolds as he keeps using unorthodox methods in order to get what he wants.

But Azuma isn't a complete asshole. He also cares about his sister, who just got out of the hospital, and his colleague Iwaki whom he considers his friend. That's where a gang starts to cause trouble in Azuma's routine.

While this film was intended to be a classic detective story directed by Kinji Fukasaku, scheduling issues caused him to step down, and Kitano took over and rewrote most of the script. The final product is a police drama which departs heavily from Kitano's previous work.