Film / Vengeance is Mine 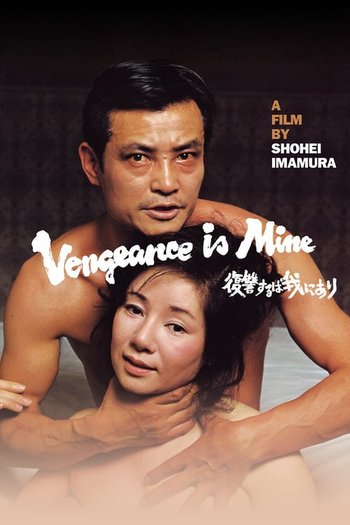 Vengeance Is Mine is a 1979 film from Japan, directed by Shohei Imamura.

It is a loosely Based on a True Story tale of a cold-blooded con artist and Serial Killer. The first time we see Iwao Enokizu (Ken Igawa), he has already been arrested by police and charged with five murders. From there, the story unspools in a series of flashbacks. In the present-day setting (late 1963), Enokizu starts out by brutally murdering two elderly truck drivers and stealing their money. Flashbacks before those flashbacks sketch out Iwao's backstory. His father, Shizuo Enokizu, is a fisherman turned innkeeper and a hardcore Catholic in a country that doesn't have very many Catholics; Iwao pours scorn on his father's piety and hypocrisy. His mother, however, loves Iwao unreservedly, and doesn't seem to care that Iwao is a budding sociopath who was in reform school in his teens and later possibly raped a woman while in the army.

After Iwao serves a stint in jail for fraud, his parents try to get him to settle down by arranging a marriage. The arranged marriage is canceled when it turns out that Iwao has impregnated his girlfriend, Kazuko. They have a couple of children, but Iwao does not settle down and goes to jail for fraud again. While he's in prison Kazuko reveals that she is really in love with Iwao's father, Shizuo. She tries to seduce him but at the last second he turns away. After getting paroled in late 1963 Iwao comes home and, having correctly sniffed out the sexual tension between his wife and his father, leaves again. He starts his present-day spree of murder and con artistry. Disguising himself as a college professor, he takes up residence at a seedy inn. The manager of the inn, Haru, is a desperate, sad, lonely middle-aged woman who falls for the handsome "professor"—leading to more tragedy.