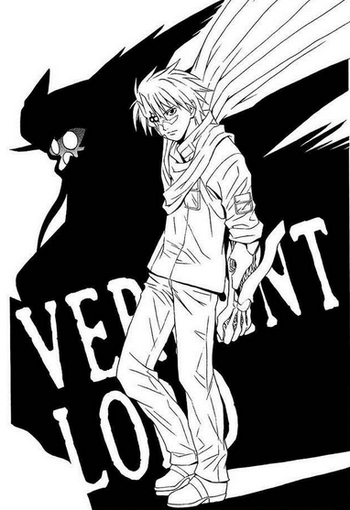 Verdant Lord (Japanese title Midori no Ou) is a nine volume manga written by Takashige Hiroshi and drawn by Soga Atsushi. It is set in an apocalyptic near feature in which plant life has been fighting against mankind, and effectively at that. The protagonist, Souma Shin, a punk teen from Japan, was on a visit to see his older twin brother, Souma Ken, a genius scientist, but all hell breaks loose when Shin decides to save a group of children being held for military purposes due to being areopaths, and an Arethusa (a plant mecha) destroys the complex, fatally wounding Shin in the process. However, Ken does save his life, by injecting a serum that turns Shin into a half-human, half-arethusa hybrid. Shin ends up reuniting with one of the child areopaths, a girl named Dina, and her older brother. Things only become crazier from there on out.