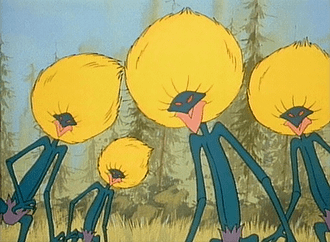 Not-so-dandelions.
Monica: But they're alive, right?
Aaron: Depends on your definition of alive. They have more in common with broccoli than they do with you. Or me.
Monica: I hate broccoli. Let's kill 'em.
— Nextwave
Advertisement:

Need an army of disposable Mooks but can't be bothered to pay them or build them? Maybe you can give your Green Thumb a workout and grow your own — all you need is some soil, some sunlight, and a little Applied Phlebotinum, and a bumper crop of minions awaits.

Like their technological brethren, the Mecha-Mooks, Plant Mooks have the advantage of providing an army of cannon fodder for the heroes without incurring the wrath of the Moral Guardians. Their strength and durability can also be justified by their plant nature — an individual sapling might be a pushover, but a giant walking tree will be more than a handful for most heroes. And it's not hard to give the Plant Mooks additional hero-stopping powers, such as vines to tie them up or sticky sap to trap them.

Unlike a Plant Person, a Plant Mook is seldom a protagonist or viewpoint character. After all, What Measure Is a Mook? In almost all cases, the Plant Mook's main purpose is to throw themselves at the heroes and get mowed down like grass.