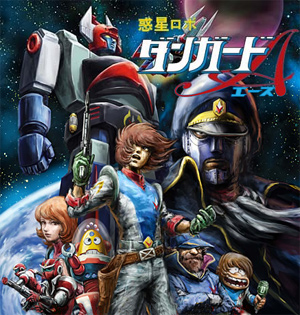 Danguard Ace takes place on a future Earth in which nearly all natural resources have been depleted. People have begun looking toward other planets to survive, in particular the tenth planet, Promete. However, before plans for peaceful settlement can begin, the first explorers are betrayed, and the first ship journeying to Promete is destroyed.

After this event, an individual named Mr. Doppler leaves toward Promete on his own ship, and declares himself Chancellor of the planet. Using Promete's resources, Chancellor Doppler constructs a vast military force greater than that of Earth's and he forbids anyone approaching the planet, under the insane belief that only he is entitled to it.

To gain control of Promete, the governments of Earth begin constructing massive combat robots. However, Doppler attacks and destroys all robots before they are completed... except for Danguard Ace. The forces sent to attack Danguard's base were destroyed because of the efforts of a mysterious, masked man called Captain Dan. Nothing is known about him, save that he previously served Doppler while under mind control.

Takuma Ichimonji, son of the man who betrayed the initial Promete exploration team, becomes a cadet at Danguard's base. Hoping to restore his father's honor, Takuma will pilot Danguard Ace to fight against Doppler's forces.

"Danguard Ace" was licensed by Jim Terry Productions as part of the Force Five promotion. English dialog was written for re-dubbing by Lynn Garrison who then combined a number of episodes into a feature length presentation which gained a cult following on the Showtime network during the eighties. The titular robot also appeared in Marvel Comics Shogun Warriors series, as well as the toy line of the same name. In 2009, William Winckler Productions produced three all new English dubbed movie versions edited from the original series. Producer William Winckler, known for Tekkaman the Space Knight, wrote, produced and directed the English films, which are seen on broadband in Japan.

Some of the main characters designs were similar to characters appearing in Space Battleship Yamato, another seminal anime that Matsumoto worked in (Takuma Ichimonji Susumu Kodai; and the doctor on the show resembles Dr. Sakezo Sado from "Yamato"). Danguard Ace also was a major influence to the popular GunBuster.