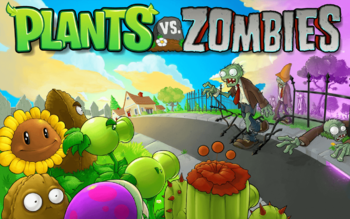 Plants vs. Zombies is an incredibly addictive Tower Defense game from PopCap Games. It's about plants fighting against a zombie invasion. The game had a free browser version that was accessible here

Zombies have risen from their graves, and seek to eat your brains. However, you find a most unlikely but trusted ally in your own front lawn as you plant various organic defences against the undead legions, and are also given advice and supplies by your neighbor Crazy Dave.

However, the zombies won't go down easily, and are constantly thinking up new ways to breach your defenses, including screendoor shields, pylon helmets, microphones, pushing stuff, laser skulls of doom, pole vaulting and zombonis that pave the way for an undead bobsledding team.

Yeah, it's that kind of game.

The game was first released for the PC. Later, a port was made for the iPhone and iPad. Another version was later made for Xbox Live on the Xbox 360, adding a multiplayer mode. After that, it was ported to the Nintendo DS, with somewhat watered down graphics due to the DS's low-res screen. There's also an Android version, and it was the deal that catapulted the Amazon Appstore to a serious competitor to Google's Android Market (although as of December 14, 2011 the Android version is available on both of them). There are also versions for the PlayStation 3 and the PlayStation Vita purchasable through the PlayStation Network.

Plants vs. Zombies and related media include: