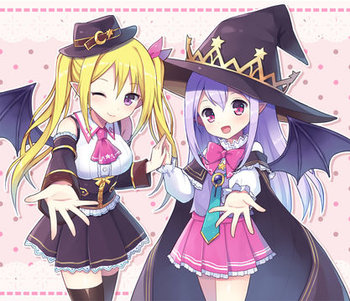 Tia and Pio doing their best to advertise.
Advertisement:

Potion Maker is a game for Android and iOS, created by a Korean studio Sinsiroad as their first product. It takes place in an alchemical workshop, where you make potions as requested by various adventurers by putting the right ingredients into a cauldron. You work along two cute girls, both of them accomplished potion makers in their own right, and an indetermined number of cats.