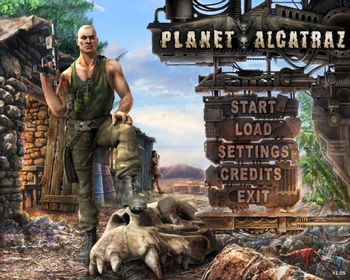 In 2006, the Russian game developer and publisher 1c Games released Санитары Подземелий (Sanitary Podzemeliy - literally "Orderlies of the Dungeon", but "Dungeon Cleaners" is more accurate: the name comes from a Russian saying that a wolf is an "Orderly of the Forest" for eating the old and ill animals, while healthy ones evade its grasp). The game was popular and, sure enough, was given an English translation and voice acting, then released to the rest of the world as Planet Alcatraz. Unfortunately, due to the game having been written almost entirely in Russian prison slang, said English translation, which evidently was somewhat quickly rushed out the gate, is considered absolutely incomprehensible.
Advertisement:

, which had long been a meme in Russia). Since Western audiences mostly lack that context, it was again simply titled as Planet Alcatraz 2.

The game is set in a distant alternate future where the Russian Empire is on a decades long space war with the Fourth Reich, and humans have discovered zero-transportation. Achievements in robotics as well as organ cloning have made criminals with life sentences completely unnecessary for society. Thus, they are exiled to one of the Empire's 50 prison planets, at the far reaches of the universe.

Sailor's Silence (Planet Alcatraz in the English version; essentially, it replaced the name of the most infamous Russian prison with the most infamous US prison) is the nickname given to planet 2-4A33713/2, which houses the most dangerous criminals that had received life sentences. In 2507, planetary agents received intel that the criminal inhabitants of Sailor's Silence are building a spaceship to escape. To verify the existence and find the location of the spaceship, 4 saboteur cadets along with an experience Sergeant were sent to the planet disguised as convicts. The four cadets are among the top students of Deathmatch Imperial academy, and this mission serves as their final exam. However, something went wrong during the dropping of the containment pods, and the five were separated. The player takes control of cadet Boar, and proceed to find his remaining team-mates and complete the mission.

Planet Alcatraz is a Real-Time with Pause tactical RPG. The character progression system is notably similar to Fallout, with the similar stats, traits, skills and perks. The main quests are mostly linear, though there are an abundance of sidequests to undertake. The game's tone is decidedly dark, with stuff like drugs and slavery being referenced and featured prominently, and racist jokes and remarks abundant (although most of which are cut from the English translation, or just Lost in Translation).

A Let's Play of the game, created by bhlaab, can be viewed here

and another one here

The creative idea for the game belongs to Dmitry Puchkov, a popular Russian translator, whose experiences as a former police detective give him an insight into the criminal world. He was consulted heavily during the development, although Executive Meddling, of course, happened as well, and some of his more extreme ideas were not implemented (e.g. more gay sex, no women). The game borrows its original name from Puchkov's novel set in the world of Quake, written decades ago. It also features references to some of Puchkov's Gag Dubs.

The original version is also known for its soundtrack, featuring "The Song of the Space Marines", which showcases some of the team members, as they prepare for the mission. See a rough translation of the chorus below:

[We] passed a hundred roads on a hundred planets
We got into trouble hundreds of times
Smile, soldier, now the fun begins
A space marine doesn't take prisoners