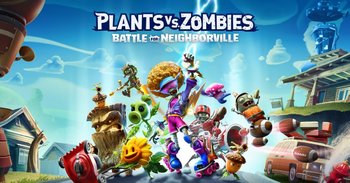 Our town’s the best town, let’s go kick some GRASS!
Plants vs. Zombies: Battle for Neighborville is a third-person Hero Shooter video game developed by PopCap Games. Released on October 18, 2019, the game is a follow-up to the Garden Warfare spin-offs, retaining much of its gameplay and expanding on it. The game definitely engages in Sequel Escalation, with 20 fully customizable character classes, one social region that functions like an online version of Garden Warfare 2's Backyard Battleground, three free-roam regions that contains numerous quests and story missions, and numerous game modes.

Plants Vs. Zombies: Battle for Neighborville contains examples of:

Makes you want to yodel

Makes you want to yodel