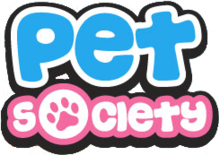 Pet Society was an online game created by the developers of Playfish and available for free through Facebook, Bebo and MySpace. In this game, you cared for an adorable animal that you made while trying to raise "Paw Points" to level up in the game. You also raised "Coins" to buy furniture, clothing, food and other various items for your pet. The object of the game was to be the highest ranking out of your friends playing it. It was also a competition for people in this game to make their pet get a better house than the rest of your friends. Though it was a game to play for free, you needed Playfish cash to buy exclusive cash items and access certain areas.
Advertisement:

Many friends were often needed to play this game, especially when it came to earn money. This is why: everyday, each friend you visited gave you fifty coins. If the person happened not to wash their pet and/or not playing, they may be covered in flies. Washing these fly covered pets gave you from twenty to eighty coins (twenty coins per fly circling them). Friends were also needed to get the free gifts and to build certain items (unless you use Playfish cash to make them.) Hardcore players and veterans tended to have a hundred friends and over.

Playfish retired the game on June 14th, 2013 when many fans and players still wanted to play, having grown attached to their virtual pets.