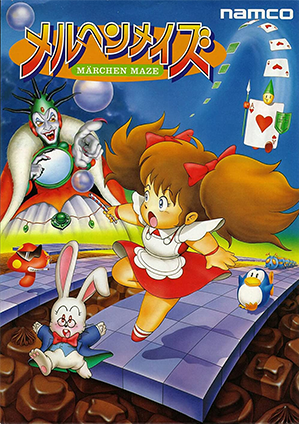 "You play Märchen Maze: you stay in Wonderland, and it shows you how deep the rabbit hole really is."
When the men on the chessboard
Get up and tell you where to go
And you've just had some kind of mushroom
And your mind is moving low
Go ask Alice, I think she'll know
— Jefferson Airplane, "White Rabbit"
Advertisement:

Alice's Adventures in Wonderland is a pretty well-known work and can be associated with surreal fantasy, drug imagery, lolita fashion, Gothic Horror (it's a frequent target of Grimmification) and other aspects of Victorian England, including Steampunk, political satire, and who knows what else.

The name "Alice", when used in a reference to Alice in Wonderland, therefore tends to be used for fantastical, ethereal characters or concepts, and that goes double if her last name is a variation on Carroll or Liddell (as Alice Liddell was a real girl who inspired Lewis Carroll's character of Alice). Dolls are also often involved, presumably by their association with the Victorian era.

Allusions like this, when not full of 1960s psychedelia, tend to be rather dark and grim, but this makes a lot of sense considering their original source. Alice's Adventures in Wonderland and its sequel are full of Black Comedy (although the death jokes and the like in the books tend to be subtle), something that can often surprise someone who reads the original versions.

Other frequent references to Alice in Wonderland include magical white rabbits, rabbit-holes, playing-card iconography, mushrooms, and so forth. If her appearance is shown or described, she'll most likely look like a little blonde girl wearing a blue and white dress, as popularized by the John Tenniel illustrations and the Disney animated adaptation.

Adaptations of Alice's Adventures in Wonderland are not part of this trope. Allusions, however, are.

Note that this trope is only for cases where a clear connection can be made between the name "Alice" and a reference to Alice in Wonderland. This trope is not intended to be a general list of every work (or even every fantasy or fantastical work) containing anyone named Alice, only when that name is clearly used in an effort to evoke the book. If you can't make a clear connection to Alice in Wonderland beyond the name "Alice" and a fantasy or magical-realism genre, don't list it here.

Conversely, references to Alice in Wonderland can be listed even if they don't specifically use the name "Alice", since they are not a distinct trope.

A Sub-Trope of Shout-Out. Is related to the One Mario Limit, in that there may be several "Alices" in a work, but a character may bear the name specifically to invoke Wonderland imagery. Compare to Dystopian Oz for dark, predominantly political, examples associated with the similar Land of Oz series.