Western Animation / Thru the Mirror 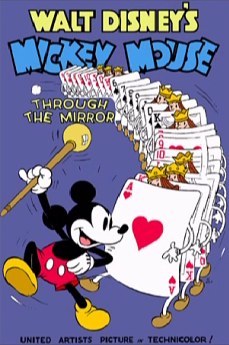 Thru the Mirror is a 1936 Mickey Mouse cartoon, directed by David Hand.
Advertisement:

The cartoon starts with Mickey sound asleep after reading Lewis Carroll's "Through The Looking-Glass". However, an astral projection of Mickey enters the world of dreams, walking through his nearby mirror and into a surreal version of his house, taking part in a series of escapes that including shrinking himself down to the size of an actual mouse, dancing around with gloves and cards, and then dealing with the King of Hearts and his army of cards in the ending.

The film is notably a runner-up on The 50 Greatest Cartoons list.