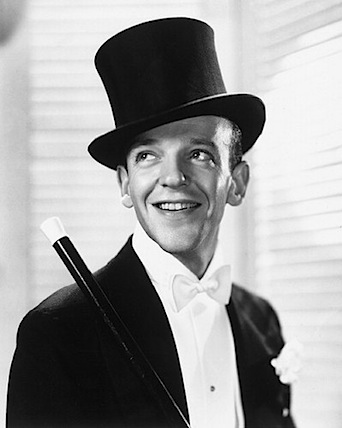 "When Ginger Rogers danced with Astaire, it was the only time in the movies when you looked at the man, not the woman."
— Gene Kelly
Advertisement:

Frederick Austerlitz, better known as Fred Astaire (May 10, 1899 - June 22, 1987), was an American film and stage actor, choreographer, singer, musician, and the original dancing machine. He made 31 musical films and was named the fifth greatest male star of all time by the American Film Institute.

His influence on Hollywood, music, and popular culture cannot be overestimated. A ton of classical dancers and choreographers, including Rudolf Nureyev, Sammy Davis Jr., Michael Jackson, Bob Fosse, Mikhail Baryshnikov, and Jerome Robbins have acknowledged Astaire's legacy and influence in their work. Gene Kelly, another titan of American musical films, was a good friend and the two collaborated a couple of times. Astaire even came out of retirement to replace Kelly in Easter Parade (1948).

Popularised Gravity Screw note Douglas Fairbanks was the first to do it in 1919 in When the Clouds Roll By, capable of tap-dancing across the ceiling in a signature scene from Royal Wedding (1951) (as seen here

). The rotating room/fixed camera trick has since been borrowed by everyone from Superman to Christopher Nolan.

He is said to have introduced more classic songs from the Great American Songbook than any other performer. He worked with most of the great songwriters of his day, including George Gershwin, Irving Berlin, Cole Porter, Jerome Kern, Johnny Mercer, and Harold Arlen.

Eventually, he retired from dancing on film and started a chain of dancing schools, then he returned to dancing musicals and kept going until Finian's Rainbow in 1968. After that, the rest of his career was in straight acting with a light comedic tone, often as an amiable con artist type in works as varied as The Towering Inferno and the Battlestar Galactica episode, "The Man With Nine Lives," as Chameleon.note Given that Astaire's character does a little social dancing in that episode, the actress who did that with him, Anne Jeffreys, was technically Astaire's final dance partner on screen.