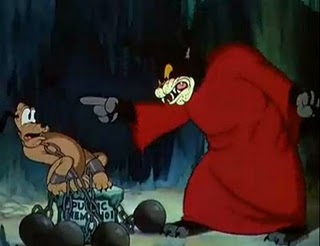 The short begins with Pluto chasing a kitten and bursting into Mickey's house. Mickey scolds him for always chasing cats and being a bully, telling Pluto that he'll regret his misdemeanors come judgement day. As Mickey gives the poor cat a bath, Pluto falls asleep by the fire and has a dream where he's lured into a court of cats in Hell who seek his conviction (his crimes included chasing one cat under a steamroller, flattening him, and killing another named Uncle Tom, who shows up there as nine angels representing his lost lives), while at the same time torturing the dog throughout the trial until Pluto is declared guilty. Pluto is, unsurprisingly, convicted, and sentenced to be burned. As the flames start to burn the rope that suspends him over the fire, a cinder pops out of the fireplace where Pluto was sleeping, waking him and causing him to run for the bathtub Mickey is cleaning the cat Pluto was chasing earlier in. After he jumps in, the dog immediately whimpers to Mickey to prove that he will never chase another cat again or else he will go to Hell, and the short ends with the cat licking Pluto.

The short is notable not only for its macabre tone, but also for its introduction of a redesign of Mickey Mouse by Fred Moore, doing away with the rigid, symmetrical design of his body in favor of an asymmetrical, organic pear, which allowed for organic usage of squash and stretch, and the ability to give Mickey a wider range of attitudes than what was possible with the original design. This also kept workers from having to trace spare change to draw Mickey.