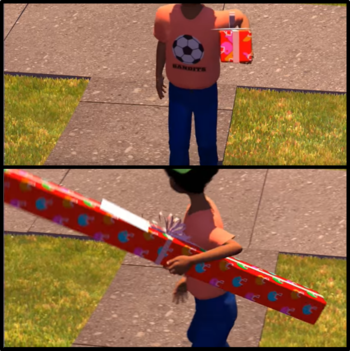 This example as presented by a... present.
Advertisement:

Often Played for Laughs, this is when something seems small when viewed from the front, but when you turn it to the side, it turns out to actually be very long. The fun thing about this trope is that it can be done with almost any object. A big part of this trope's comedy value comes from the Oh, Crap! reaction that other characters may get from it, if they were hoping that the object really was small.

May lead to a Plank Gag. Subtrope of Depth Deception and sister trope to Big Little Man.