Judgement of the Dead 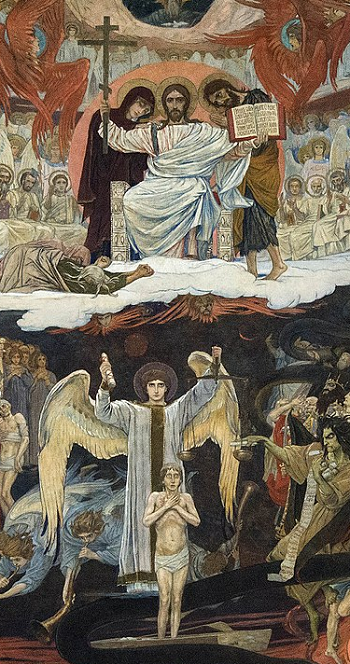 "Also another book was opened, the book of life. And the dead were judged according to their works, as recorded in the books."note The Last Judgement (detail) (1904)
So our hero has died. Will he go to Heaven, to Hell, or somewhere else entirely? In this trope, our hero (or his spirit/soul) appears before a judge, who reviews his actions in life to determine where he deserves to end up. Often this is a chance to recap and reflect upon important events and character-defining moments in the story.
Advertisement:

The judgement typically takes place in an Afterlife Antechamber, with the character being judged moving on to Heaven and Hell, the Spirit World, The Underworld, The Nothing After Death, or wherever is appropriate for the setting and deeds. Occasionally, the deceased person might be able to talk the judge out of sentencing them at all, and return to the land of the living. In To Hell and Back plotlines, this sort of Rules Lawyering is essential to persuade the judge to let you in or out.

Who does the judging can vary — it can be anyone from God himself to a God of the Dead to the Grim Reaper to Saint Peter (the gatekeeper of Fluffy Cloud Heaven) or any other form of divine lackey. The judge's temperament can fall anywhere from the Hanging Judge to The Paragon, but often they are Lawful Neutral, appearing harsh or eerie but devoted to justice. All Are Equal in Death after all, and beggars and kings alike can expect to be judged by the same standards. This trope is almost essential to any Celestial Bureaucracy.

Note that the judgement does not need to be a formal proceeding, occasion or event; in fact, the less important the judge is in the grand scheme of things, the less likely it is to be an actual trial. A typical depiction (particularly in comedic works) is to have St. Peter simply read over the newly deceased's entry in the all-seeing Book of Earthly Deeds, and make a pass/fail decision then and there. Of course, the Rule of Drama states that the protagonist is most likely to be refused passage.

This trope is Older Than Dirt, as the judgement of the dead was a key part of Egyptian Mythology. Similar elements exist in many modern religions. Shout Outs to to older examples are common; expies of characters from The Aeneid and recreations of the Weighing of the Heart from the Ancient Egyptian Book of the Dead seem to be especially popular.

Compare Chess with Death, where a character's fate is determined by a test of skills or luck rather than a trial of their actions. Compare also Jury of the Damned, where the judgement happens while the defendant is still alive and by a jury of evil souls. Contrast It's a Wonderful Plot and Yet Another Christmas Carol, which also involve supernatural reflection on a character's life, but seek to make a character change their ways rather than determine their fate in the afterlife.

This is a Death Trope. Beware of unmarked spoilers!

Alternative Title(s): Judgment Of The Dead