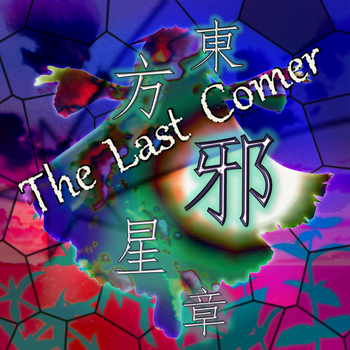 There fell a great star from heaven,
burning as it were a lamp,
and it fell upon the third part of the rivers,
and upon the fountains of waters.
—Revelations 8:10-11

Touhou Jaseishounote "Wicked Star Chapter" ~ The Last Comer is a Touhou Project fangame whose script was written by Ido and Yuuyu Hatsuke. The demo of the game was released at Comiket 83. It was released in full on August 26, 2012.

A meteor of incredible spiritual power has fallen into Gensokyo, and with its falling, the star of the Shinto God of Evil, Ame no Kagaseo

, has flared up to unprecedented levels. Troubling as it is to the inhabitants of Gensokyo, these events mean something entirely different to the Christian Pantheon (the "pagan gods across the ocean"), and several angels and powers have made their move to Gensokyo to apparently initiate The End of the World as We Know It. Quietly, however, since they have their own issues they're dealing with.

Naturally, the protectors of Gensokyo have something to say about this.