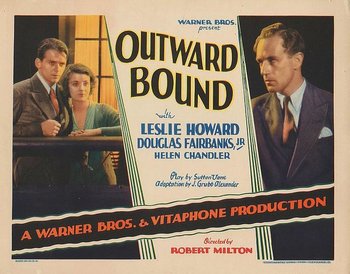 Fairbanks and Helen Chandler (who soon after this would appear as Mina in the original Bela Lugosi Dracula) play Henry and Ann, lovers in some sort of illicit romance. (It turns out that Henry is trapped in a loveless marriage to someone else.) Henry and Ann share some foreboding dialogue that suggests they are going to kill themselves—they wonder about who will take in their pet dog, Laddie.

Instead, they find themselves aboard a passenger ship. Other passengers include Tom Prior (Howard), an alcoholic; the mild-mannered Rev. Duke; Lingley, an obnoxious businessman; Mrs. Cliveden-Banks, an unbearably snobby society matron; and Mrs. Midget, a considerably more humble charwoman. Something is "queer" about their voyage, however. No one seems to be able to remember how they got on the ship, or for that matter why. The ship has no lights. The seven of them are the only passengers on a large ocean liner, and "Scrubby" the genial steward seems to be the only crew member...

Outward Bound was an adaptation of a hit stage play. Several of the actors from the play reprised their roles, and Leslie Howard switched from playing Henry on the stage to playing Tom on film. When the play was brought back to Broadway in 1938, Helen Chandler again played Ann.

Remade in 1944 as Between Two Worlds with John Garfield as Tom.