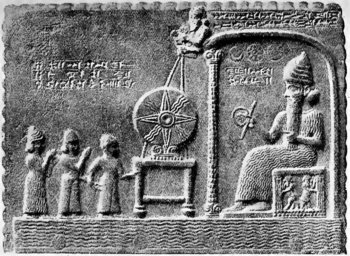 The term "Mesopotamian mythology" covers the ancient religions of Sumer, the Akkadian Empire, Assyria, and Babylon.

Sumer, as you might have learned in your World History classes, was probably the oldest human civilization. It flourished from the 5th to the 3rd millennia BCE. Sumer began and ended as a collection of city-states in what is now Iraq. It's usually assumed that Sumerians were responsible for the invention of year-round agriculture, writing, the wheel, irrigation, and beer. Since the Sumerian language has no known cognates, it's anyone's guess where they came from. Some "thinkers" take this a step further and argue that the Sumerians were either assisted by aliens or were aliens themselves.

As mentioned, Sumer was largely composed of various cities and settlements typically given to fighting among themselves. Thus, rather than a unified nation, in reality, Sumer was more akin to a collection of states that spoke a common language and worshiped largely the same pantheon, akin to Ancient Greece.

Sumer began to decline in the 3rd millennium BCE. Like the collapse of any superpower, there were a lot of reasons for this, but the primary cause, it seems, was that they were displaced by Akkadians and various other Semitic peoples. After Sumer's decline, there arose the Akkadian Empire, who "borrowed" the Sumerian gods in a similar fashion to the way the Romans borrowed the Greek gods. The Akkadian Empire was not as fortunate as Sumer had been, though, and its rule collapsed after about a century. But the Akkadians proved to be a plucky lot, founding new cities of their own and retaking their old lands, only to be continually reconquered by their neighbors, restarting the whole process. They would eventually regroup into the united Babylonian civilization, establishing a stronger empire more organized and advanced than their predecessors for more than a thousand years.

Names and nation aside, the Babylonians never forgot their roots. The pantheon largely stayed the same, the method of writing from clay tablets was kept, and their mother tongue was preserved in literature among the priests and noble castes (and as a spoken language), to some degree. It's in this period that the majority of our knowledge from Sumer is derived. The Babylonians, if nothing else, were excellent record keepers, maintaining and adding to the Sumerian corpus and preserving their ancestors' more notable myths and stories... until they were all conquered in 539 BCE by the Persians, which rendered the whole thing pretty moot.

Studying Mesopotamian mythology, in general, is a little bit easier than studying most Indo-European mythologies other than Classical Mythology, because the Mesopotamians were literate. Even so, as with any mythos, there's a lot of conflicting information. The most likely reason is an evolution of their religion as the names of gods and places changed (or were rewritten) over time. As Mesopotamian mythology was largely forgotten until serious archaeology got underway in the 19th century, is very ancient, and can generate some massive Values Dissonance for modern readers, it can seem quite strange and uncanny to modern eyes; when a creature from this mythos appears in modern fiction, it thus tends to be as a Mesopotamian Monstrosity.

Major characters of Mesopotamian Mythology include:

Mesopotamia figures heavily in The Bible. Abraham and his kin were, mostly likely, natives of the Sumerian city of Ur,note So this article may include some Ur examples Of Ur-Examples. and the Assyrian and Babylonian conquest of the Middle East (including the Babylonian captivity) were defining events for the Jews as an ethnoreligious people.note Notably, while monotheism originated during the First Temple period, it only became a universal defining trait of the Israelites during and after the captivity. Basically, the captivity transformed the Israelites into Jews. Several passages and allusions, including The Great Flood myths, are strikingly similar to descriptions in the Bible.

Works on the wiki that represent Mesopotamian Mythology:

Works that reference and/or derive from Mesopotamian mythology: